Yet Another Reflow Oven Project - Hacking a Nexa remote

A couple of years ago I needed a reflow oven for my electronics projects. There are tons of home-brew examples on the net, and almost all DIY reflow oven builds you find on the net involve creating or buying some sort of high-side (120-240 VAC) controller to entice the desire temperature profile out of the heating elements. But is mains control really necessary, or is these a simpler/safer way? Can you build an oven controller without having to deal with voltages higher than 5V, one that even kids can build and handle safely?

After a short trip to the hardware store in, I came back with a Nexa wireless mains switch and its remote control. Upon taking the remote apart 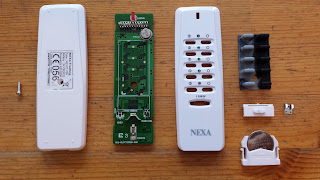 it became obvious that simulating key presses should be possible by simply shorting the right pads, located underneath the rubber keys. I opted to use the two top On/Off buttons, and found the corresponding traces in the PCB, plus ground.
By not soldering onto the keys pads, and by routing the wires under the PCB, the rubber keypad can still be used, which is a bonus if you need to manually turn the mains switch off while testing your controller software. 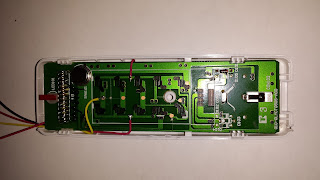 The next step is to wire up a couple of transistors to do the actual shorting of the keypads, controllable from CMOS levels. Use what you have in your parts box, it's not critical. For strain relief, secure the remote to the circuit any way you like, and you're done. Who says rubber bands are of little use in electronics? ;-) 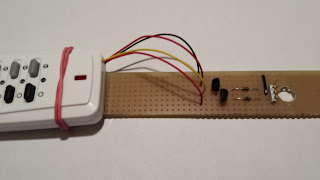 Notice the three-pin connector on my bread board? It connects to a USB-to-GPIO cable from FTDI, allowing my simple PC controller program to drive the transistors, to simulate an 'On' or 'Off' key press.

The simplicity of my control scheme should be apparent by now:
It's really that simple, and you do get decent soldering results from it.

Fine, but how to read out the oven's temperature, the control algorithm is helpless without a continuous flow of temperature readings? The choice of the C232HM cable was not completely random: the Linux MPSSE drivers can emulate SPI, which is spot on for reading termocouples via a MAX31855K. (Making the Linux MPSSE drivers work properly for SPI was actually the hardest part of the reflow oven build.....)

I went the easy route, and bought a break-out board for the MAX31855K, but you could also roll your own and include the remote's transistors on the same board. Here is a shot of break-out board, the Nexa remote and the USB-to-GPIO/SPI cable, all temporarily strapped to the side of the oven for the first test run. 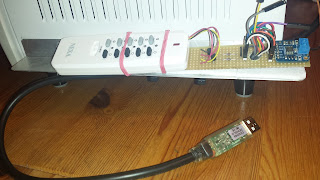 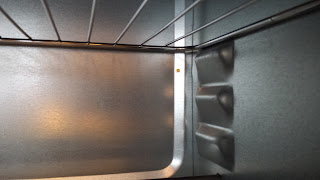 The oven itself is a plain toaster oven with four resistive heating elements (two in ceiling, two on the floor), costing approximately 100 USD. Underneath its outer metal cover there are no surprises. (There is no need to remove the cover for this low voltage controller build, but I did initially, just to see what my options were. Note the live heater terminals....) 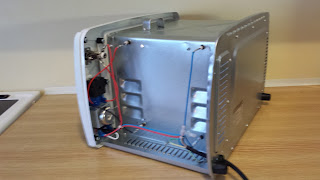 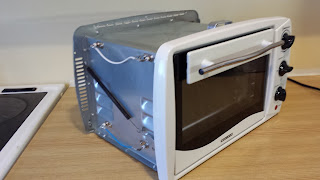 Over the the last three year's I've successfully reflowed a dozen of my own boards using this simple apparatus. The coldest regions of the heating chamber are the corners, so I make sure I place the boards somewhere in the center of the oven. Below are a couple of pictures from the virgin run. 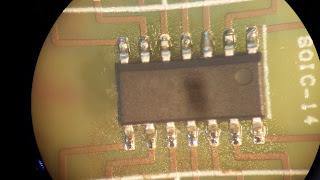 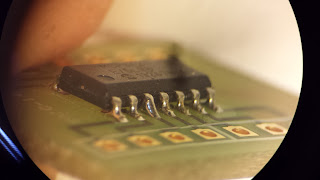 The uneven result for this SOIC-14 is due to the solder paste application method: I used a syringe, not a stencil, so the amount of solder paste varied from pad to pad. The large area covered by resin residue also suggests a too quick increase in temperature. This was easily fixed in the controller software (after all it's only 100 lines or so of Perl ;-) , and the oven is now an indispensable tool.

With a little bit of ingenuity, anyone can build a reflow oven without messing with mains lines.  Happy reflowing!